How Much Your My Case Worth?click here to request a free consultation

Featured in the media
The Firm is well respected by local and national media. Read some of the mentions.
view all accolades

Legal Library
Research the law on your case so you can make smarter decisions and prepare to meet an attorney.
Enter the Legal Library

Outstanding
customer service
Our clients know what is happening with their case at all times and what their realistic timeline will be.
Meet the Attorneys

Request our FREE
Accident e-book
You can get a free copy of our book today: The Georgia Guide to Handling Accident Claims
FREE e-book

The Simon Law Firm has offices in Atlanta and throughout Georgia focusing on helping families with serious injuries related to truck and commercial vehicle accidents. We listen to you to make sure we are accomplishing your goals. Over 30% of our cases are commercial truck injuries.

Trucking Accident Lawyers Serving Victims In And Around Atlanta, GA

Trucks and commercial vehicles may be one of the most prevalent means to distribute goods, but they also come with a lot of risk. It is reported that as much as 70% of all freight moved in the United States is done by trucks. According to the National Highway Traffic Safety Administration (NHTSA), a division of the United States Department of Transportation, the number of truck-related accidents that occur each year is in the hundreds of thousands. With over 700 accidents every day in America alone- it’s no wonder that trucks generate so many headlines for being unsafe! If you are the victim of a truck or commercial vehicle wreck you, need the experienced legal help of our Atlanta truck accident attorneys to seek justice and explore how you can be fairly compensated.

Trucking accident cases are unique because of the complex web of Federal Regulations governing driver hours and vehicle repair and inspection routines. Additionally, tractor-trailers have complex computer systems tracking throttle and braking systems. All of these need to be downloaded after a crash.

Large trucking companies, whether it be Scheider, Werner, Knight Transportation or UPS have lawyers on 24 call to respond to the scene of a bad accident and to save favorable evidence.

Our Atlanta truck accident attorney is trained by insurance companies to defend trucking companies early in their careers, so they know how this whole system works. The sooner you hire us, the sooner we can start visiting the scene and interviewing witnesses to preserve the evidence that makes the difference. If we take your case, we’ll immediately start investigating the accident, collecting pertinent evidence such as police reports and medical documents, interviewing any witnesses, and filing the proper paperwork.

Let us give you an example; in 2016 a young man called in from Detroit. He had been in a terrible crash as a passenger in a tractor-trailer that crashed in the mountains near Chattanooga. The trucking company denied responsibility and tried to say that the driver only crashed because of the design of the roadway. Our client had over $400,000 in medical bills from several surgeries and the insurance company would not even offer the medical bill totals. We downloaded the ECM on the tractor-trailer and immediately filed suit.

We pulled all of the electronic tracking records including the satellite pings from the Qualcomm unit on the truck and were able to develop evidence that showed that not only was the driver speeding downhill through the mountains but that the safety director got tired of getting automated email warnings about this driver speeding so HE TURNED THEM OFF! This inflammatory evidence completely turned the case around and they ultimately paid over $2,000,000 at a mediation.

We listen to your concerns and make sure you know all of the options before you make a decision on your case.

The majority of truck drivers are professional, courteous, and careful, but despite this fact, accidents do happen, either by mistake or carelessness. Among the factors that typically contribute to tractor-trailer accidents are:

The elements required to prove negligence in trucking accident claims may seem straightforward, but how to substantiate them may be harder than you expect. Identifying the truly responsible parties can be difficult. It could be the driver, the trucking company, a third party who loaded or failed to secure cargo, and even government entities if there were dangerous road conditions that were not identified and the public sufficiently warned.

More Information About Our Team of Attorneys

Featured in the Media
view all accolades

A north Georgia family is suing the popular app Snapchat for negligence, claiming it encouraged a teenage driver to take a picture while going more than 100 miles per hour.

Talk radio host Neal Boortz spurred Cobb School executives into action Tuesday, after he read a letter from an east Cobb lawyer alleging that money raised for the family of Karla Campos was being diverted.
what our clients say
Chris Simon and his team handled my accident case, and were fantastic to work with. Chris and his assistants, Alicia and Laynie, were professional, courteous and efficient, and responded quickly (and patiently) to my every question and concern. My case was resolved fairly and with minimal stress on my end, the importance of which cannot be overstated, especially when dealing with the pain and frustration of a car accident. I highly recommend the Simon law firm.
Michelle C. GOOGLE REVIEW

I originally contacted the Simon Law firm based on the great reviews I read when searching for a lawyer to handle my case after a car accident. Let me just say that I am happy I found this firm and can attest to the fact that my experience with both Tyler and Laynie have been nothing short than amazing.
Kamisha W. GOOGLE REVIEW

For two clients badly hurt in a tractor-trailer accident.

On dash camera t-bone collision taking the life of a car sales lady in the prime of her life.

For a client badly injured in a tractor-trailer accident.

$350,000 for a pedestrian with rotator cuff surgery and meniscal surgery to the knee involving Cotton State Insurance. 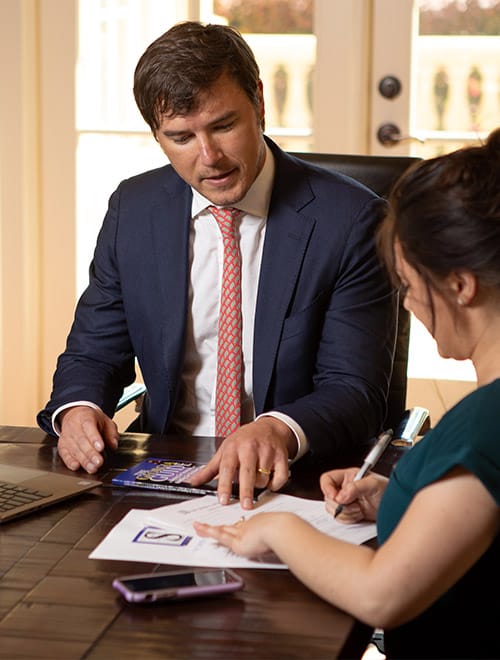 If you have been injured in a commercial truck accident, you may be legally entitled to compensation for medical treatment (present and future), lost wages, property damage and, in some cases, pain and suffering or emotional distress.

In trucking accident cases you must prove negligence and adhere to the legal statute of limitation, or deadline, for filing your claim. Our skilled and compassionate legal team can help you when you need it most. Being injured in an accident is stressful enough.  Let us take some of the burdens off you so that you can concentrate on healing and getting your life back on track.